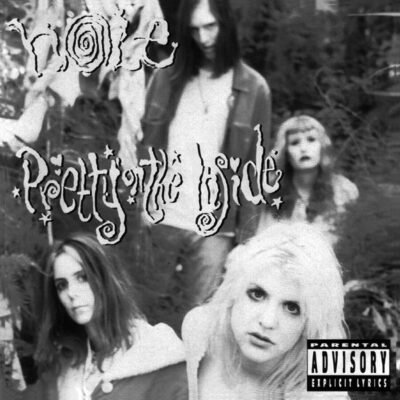 PRETTY ON THE INSIDE

Hole was a rock band formed in Los Angeles by vocalist Courtney Love and noise guitarist Eric Erlandson, augmented at different times by various female rhythm players. Co-produced by Kim Gordon from Sonic
Youth, Pretty On The Inside draws inspiration from that band plus others ranging from Crazy Horse to Bauhaus, plunging everything into a riff-vortex of remorseless distortion over which Love rants and screams words centred on sexual politics, confrontation and defiance of society. The result remains one of the defining albums of the early 90s, a period when both female rockers and rage-driven guitar music were briefly in the ascendant. Like most interesting bands, Hole started on the edge but then retreated towards the mainstream centreground, making their subsequent work a tepid (but commercially successful) dilution of their original vision, while Love gained ever-increasing personal notoriety by consorting with Nirvana’s Kurt Cobain.