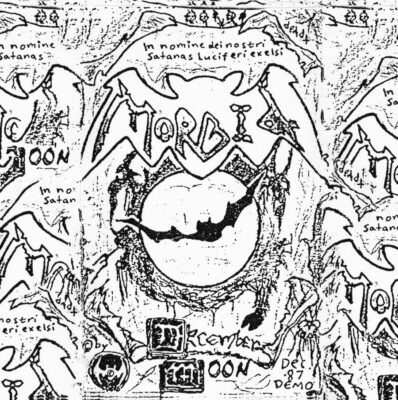 Another eighteen minutes of primal metal from the frozen norselands, and one of the first fully-formed blasts from Sweden’s post-Bathory underground. December Moon was a 4-song cassette-only demo by Morbid, a band who disappeared after just one further, less interesting, recording. The hellish vocals on December Moon are by Dead, by all accounts a disturbed, sepulchral individual who next joined Norwegian band Mayhem before finally killing himself by shotgun in 1991; Dead’s multi-tracked impersonation of a possessed psycho-doll on “Disgusting Semla” remains a suitably repugnant moment. With its transitional riffing and percussion haunted by Dead’s graveyard croaking, December Moon points the way forward for Swedish metal in the black ice age to come.