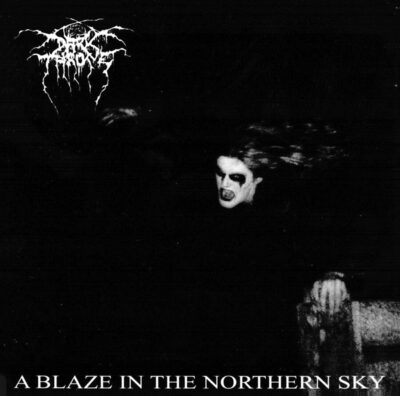 A BLAZE IN THE NORTHERN SKY

The birth of Norwegian black metal, heralded by a profane anti-religious rite which cedes to Darkthrone’s concept of demonic evil expressed as underground music, a trip through the beauty labyrinth of razors. Harking back to extreme North European metal bands of the 80s, Darkthrone transmute the alchemical essence into its defining form as a pagan cult of the primordial night. Black metal, which would thrive over the following two years, soon revealed itself as the most controversial and confrontational in the history of youth music, far surpassing the posturings of punk in its clash with the agents of religion, law and civilization. The burning down of churches, calls for racial purity, murders, suicides and violence made the philosophy behind Norway’s black metal cult as real and as threatening as its music, and both were first
explicitly expressed on A Blaze In The Northern Sky where the growing complexities of the rival death metal cult are negated in a sublime ice-storm of nocturnal blasphemies and obscene, wire-noose riff psychosis.