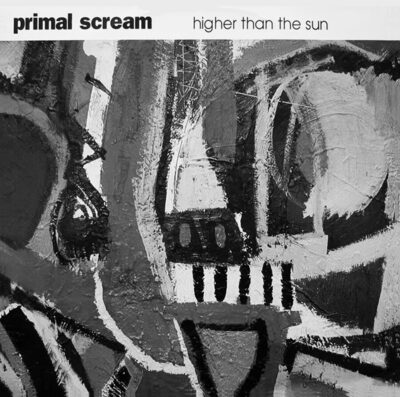 HIGHER THAN THE SUN

Spurred by the success of The Stone Roses, Primal Scream embraced the zeitgeist. “Higher Than the Sun” was a signature track included in two versions on Screamadelica, an album which clearly marked the moment when the UK rave scene first wrapped its ecstatic tentacles around the nation’s rock youth. As well as offering a prime fusion of drug-enhanced pop-rock and electronica, “Higher Than the Sun” also illustrates the concomicant emergence of “remix” culture, under which artists would hand over the tapes of their work to other producers, artists and even club DJs with a remit to create something new from the base elements. Version A1 here was produced by “ambient house” artists The Orb, whilst A2 and B1 are
remixes by DJ/producer Andrew Weatherall, B1 featuring Jah Wobble. An edited version of the EP Higher Than The Sun (Sire Records 9-40133-2, 1991), which actually contains five versions of the same song.