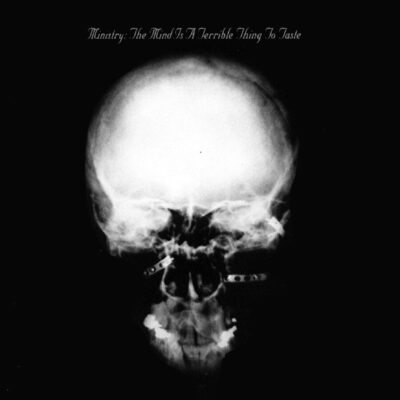 THE MIND IS A TERRIBLE THING TO TASTE

With The Mind Is A Terrible Thing To Taste, Ministry advanced electro-industrial music into its end-game by introducing a punishing regime of aggression and ultra-heavy hardcore/metal guitar figures which drive nearly every track with remorseless repetitions. Ghosts of Public image, Killing Joke and others emerge more forcefully on tracks like A4 where the cyclic guitars drop out, but The Mind Is A Terrible Thing To Taste will be remembered for its predominant metallic riff assaults taking Killing Joke’s original vision to a violent new dimension. This new electro-metal phase would prove inspirational among its pool of primary innovators, as well as inevitably providing a blueprint for later acts to pastiche with watered-down and more commercially viable syntheses.