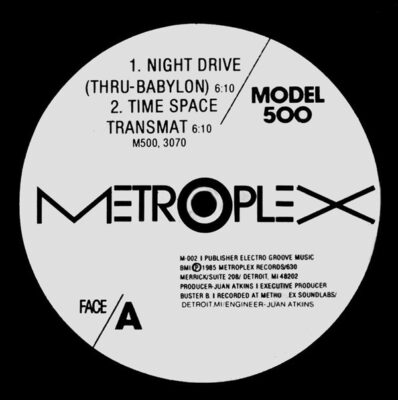 The most far-reaching influence exerted by German group Kraftwerk came in the 1980s, when they inspired new forms of electronic music in American black music culture leading to two movements which by the end of the decade had swept the entire planet – hip-hop and acid house. Before hip-hop came electro, an urban street music epitomised by Afrika Bambaataa’s “Planet Rock”, a track constructed mainly from Kraftwerk’s “Trans-Europa Express”; electro in turn was one of the numerous influences on Juan Atkins, a Detroit visionary whose dreams of a new futuristic electronic music were inspired by Kraftwerk, the sequencer disco hits of Giorgio Moroder, and even synth-pop star Gary Numan. Under the name Model 500, Atkins released a series of tracks in 1985 in a style which would become known as techno, in turn leading to acid house and all its subsequent derivatives. The tracks on Model 500’s Night Drive – glacial, robotic, but perversely hot-wired to the human body in motion – represent electronic music turning towards its final destination.