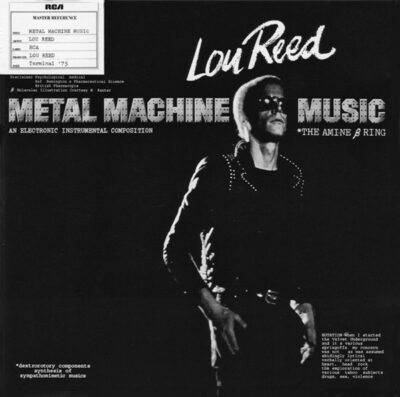 After a succession of below-average solo albums, former Velvet Underground singer/guitarist Lou Reed finally – if perhaps unwittingly – created a modern masterpiece. Sub-titled The Amine β Ring, Metal Machine Music was an exhilarating double LP of circular guitar noise, feedback and electric cacophony, hilariously marketed by RCA as a mainstream rock album. It was soon withdrawn from sale after multiple bad reviews, customer returns and complaints. Metal Machine Music may have been intended as a joke, a contract-ending ploy, or just a sneer at the world in general; it turned out to be Reed’s one and only post-VU recording of any interest or lasting value. It stands as a foundational recording of noise music and a harbinger of future aberrations, drone metal in particular.