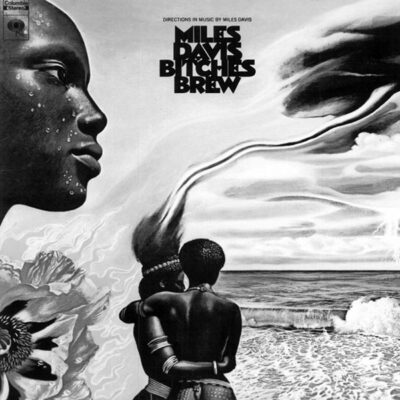 Two decades after starting out as a bebop horn player with Charlie Parker, Miles Davis began to transition away from traditional jazz modes into a new electric sound that synthesized elements of funk and rock, starting with the 1969 album In A Silent Way and flowering with Bitches Brew, a 94-minute double album recorded later that same year. The six instrumental tracks presented here were recorded live in studio with an ensemble driven by multiple keyboards and massive percussion, marked by the electric guitar of John McLaughlin – more restrained than his work with The Tony Williams Lifetime, but decisive in the record’s overall sound. The resulting music was then heavily edited and manipulated by producer Teo Macero, a revolutionary process which would find its ultimate expression three years later with Davis’ On The Corner, one of the most brilliant albums of music ever created. Detonating notions of  jazz, Bitches Brew was the first outburst by a pool of musicians who, both with Miles and in other guises, would during the following three years produce some of the world’s most exhilarating experimental music.